The Government of Saudi Arabia realized from the outset the importance of the private sector as an economic development partner, and civil aviation sector is ambitious having ideal investment factors. Air transport has increasing growth in the Middle East, particularly in the Saudi Arabia. Kingdom of Saudi Arabia is a special country withgeographical location and status of religion in the Muslim world. Furthermore, due to its economic strength and openness, investments to the sector are attracted with the belief that they will be successfully developed. Given the importance and the role of the air transport sector in the service of pilgrims and visitors to the Prophet's mosque, The King (Allah preserve him) directed to transform Prince Mohammad Bin Abdul-Aziz airport in Medina to an international airport, to join the international airports systems in the Kingdom.

On that the Supreme Economic Council issued a decision to approve the participation of the private sector into the implementation, development and operation of the Prince Mohammed bin Abdul Aziz Airport Project, which is considered as a new airport.

In this context the General Organization of Civil Aviation (GACA) ensured international participation in this partnership project between public and private sector and with the support of International Finance Corporation (IFC), a member of the World Bank Group, as lead advisor to the organization for the project, which represents the first partnership between the public and private sectors in airports in KSA; launched an ambitious plan to modernize and expand the airport with private sector participation under a long-term concession. This approach is part of GACA’s overall strategy of reforming and modernizing Saudi Arabia’s aviation industry.

On 29/10/2011 the Build, Transfer and Operate Agreement (BTO), was signed between the General Authority for Civil Aviation and TIBAH Airports Development Co. to become the first airport project in the Middle East to be fully built in PPP.

The project was funded by amount of one billion and two hundred million U.S. dollars in an Islamic finance way by the NCB, SABB and Arab National Bank under the supervision of the International Finance Corporation consultative (IFC) a member of the World Bank Group.

The project was inaugurated on 2nd July, 2015 by The Custodian of the Two Holy Mosques King Salman bin Abdulaziz al Saud, in the presence of other major dignitaries from the kingdom. The $1.2 billion expansion plan consists of a three-level terminal covering over 156,940 square metres with 16 aircraft stands and boarding bridges.

For Hajj and Umrah pilgrims, who are looking to sanctify their travel with a visit to Madinah, the airport expansion plan comes as a boon. Moreover, Prince Mohammad Bin Abdulaziz International Airport (Madinah Airport) is also likely to be the harbinger of heightened economic activity and the precursor to other privatisation initiatives.

While Phase I of the airport can handle 8 million passengers, the second and third phases will be able to handle passenger traffic of 14 million and 27 million, respectively.

The new Madinah Airport is not only a major part of the Holy city’s infrastructure, it is also playing an eminent role in the socio-economic development of the region by fostering  economic activities by means of encouraging international commerce and tourism and by generating employment opportunities.

Aviation is a highly regulated industry due to the global character of the business. In Turkey, the precautions to be taken at airports against COVID-19 are defined in the “Airports Pandemic Precautions and Certification Circular”, issued by the Directorate General of Civil Aviation (SHGM). We have implemented these precautions fully at our airport.

As TAV Airports, our global footprint reaches 100 airports in 30 countries. Through this know-how, we have implemented precautions that go beyond legal requirements. Our staff is trained regarding the new regulations and code of conduct.

The precautions taken at our airport can be grouped under three main areas.

Firstly, we have mapped the movement of passengers and staff inside the airport and configured a flow that would enable everyone to keep safe physical distance with other in every step of the way. Secondly, we have increased the frequency of disinfection and hygiene works. Thirdly, we have made arrangements to minimize contact between passengers and airport staff.

To protect yourself and others, you are required to wear a mask at all times during your journey in the airport. Passengers without a mask will not be allowed inside the terminal and will not be able to board the plane. Irregularity to comply with this rule may result in penalties.

We kindly remind you to wear a mask during your trip to and from the airport with public transportation.

No, you can still check-in to your flight when you arrive at the terminal. On the other hand, for a faster and safer experience, we recommend to complete your online check-in before arriving at the terminal, whenever possible.

We have implemented signage for you to keep your physical distance with others during security control. Please adhere to directions.

Until further notice, only passengers and airport staff will be allowed inside the terminal. Please wait in the carpark to welcome guests.

We recommend that you arrive at the airport at least 2 hours before your flight for domestic flights, and 3 hours for international flights.

The lounges at our airport are configured as for you to keep your safe physical distance with others. Please follow instructions and signage.

During this phase, some facilities at our airport may be closed to service. For detailed information: www.primeclass.com.tr

The F&B points at our airport are configured as for you to keep your safe physical distance with others. Please follow instructions and signage. Wearing a mask is obligatory at F&B points.

The duty-free at our airport are configured as for you to keep your safe physical distance with others. Please follow instructions and signage. Wearing a mask is obligatory at duty-free shops.

The prayer areas at our airport are configured as for you to keep your safe physical distance with others. Please follow instructions and signage.

All waiting areas at our airport are configured as for you to keep your safe physical distance with others. Please follow instructions and signage.

Boarding will begin from the back of the aircraft and proceed to front row seats. Please wait for your turn.

Boarding pass and ID checks are configured to minimize contact with others.

Passengers without masks won’t be allowed to board the airplane.

All arrival areas at our airport are configured as for you to keep your safe physical distance with others. Please follow instructions and signage. 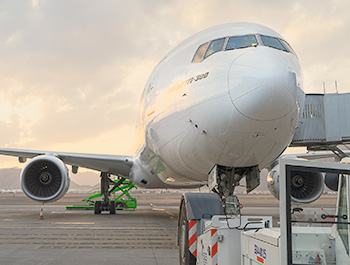 Real-time information of arrival and departure flights at Madinah Airport 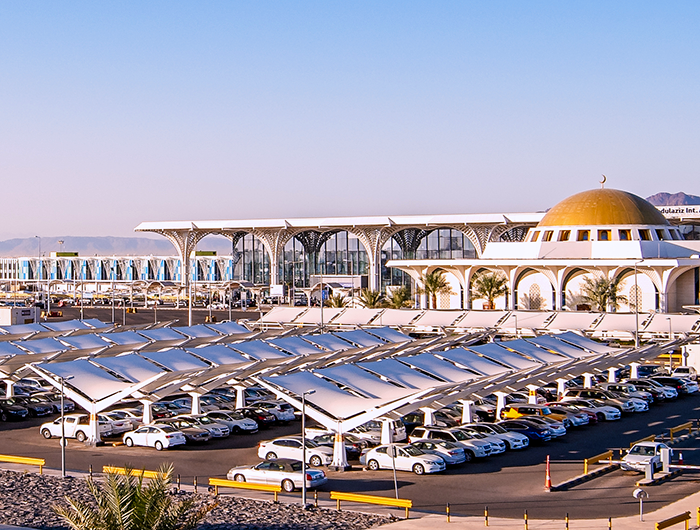 Your way to a secure parking space! 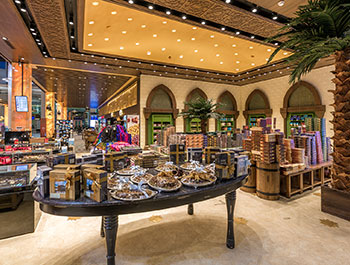 See the full range of shops in our shopping universe. At the airport you'll find a great selection of shops within fashion, electronics, design and souvenirs

Schedules, price information and ticket operations regarding flights are under the control and responsibility of the airline companies. You can access detailed and accurate information from your airline company.
Yes. You need to make your subscription within one hour of entering the car park.
Our terminal and our parking provide 24 hour services and you can make your subscription transaction any time of the day in a very short time.
Airline companies are responsible for all procedures after check-in, during loading of luggage to aircraft and afterwards. Therefore you should make your application to related airlines company Lost-Damaged Luggage Units with your identification and luggage information.
COOKIE INFORMATION

To ensure the best service on this website we use cookies to analyse the behavior of our users. E.g. what language your browsers uses, what device you use to visit this site or how often you visit this website. By clicking OK you agree to our usage of cookies and webtracking tools (e.g. Google analytics)', copyrightText: 'All rights reserved. © TAV Technologies